Is Virtual As Good As Real?

Dr. Matt Browning wants people to spend more time outdoors. An Assistant Professor in the Department of Recreation, Sport and Tourism, his research is rooted in environmental psychology, which addresses the interaction between people and their surroundings. He has examined ways to connect children with nature while sustaining the natural environment and to enhance the perceived value of nature centers to residents of the surrounding communities.

Nature Has Its Benefits

Spending time in nature has been shown to have a number of benefits, including improvements in short-term memory, mental energy, concentration, and mental and physical health, and reductions in stress and inflammation. What about people who don’t have access to the outdoors, those who live in cities with limited green space or those who may be unable to get outside because of health issues, age, and other factors? How can they derive the benefits of nature?

In his most recent research, Dr. Browning is exploring the potential of virtual nature as a substitute for the real thing. A study he recently completed may be the first of its kind to make an explicit comparison of the benefits derived from virtual versus real nature. Study participants were taken to a nature center and randomly assigned to one of three conditions: sitting inside staring at a blank wall; going outside for a short walk, followed by spending time in an old growth forest; or having a 360-degree virtual reality experience of the old growth forest.

Participants were asked to describe their mood and whether they felt their experience was restorative. Dr. Browning also collected physiological data on skin conductance and heart rate variability, two measures of the mind’s impact on the function of the autonomic nervous system.

What Did He Find? 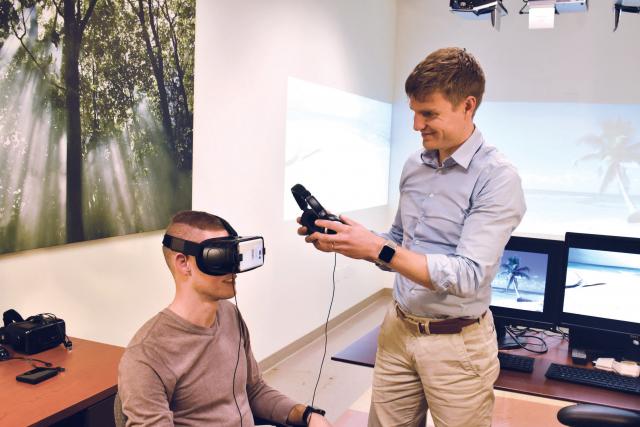 While the physiological data was still being analyzed at press time, Dr. Browning reported that data collected on participants’ psychological state indicated no differences between those in the virtual setting and those outdoors. Both groups responded positively to their experiences, while the mood of the group that remained inside staring at a wall either remained the same or worsened. This is an encouraging result, but Dr. Browning issued a caveat. “Many of the participants hadn’t used a virtual reality headset before, so I think the next step in this research is to examine to what extent the effect can be attributed to the novelty of the situation,” he said. “If we take a walk in the woods every day for a week, we’ll see new things each time. If we view the same virtual reality environment day after day, it might be less engaging and the positive effect might wear off.”

He hopes to follow up with a study where people who have been hospitalized for treatment of chronic anxiety and depression view virtual reality nature environments both in the treatment facility and for 30 days after discharge. By examining the severity of their symptoms throughout the study period as well as remission rates, Dr. Browning hopes to gain insight into what he calls the novelty effect.

In addition to studies in the eld, Dr. Browning is pursuing research in his Virtual Reality and Nature Lab to determine which qualities of simulated nature offer the greatest benet and whether different combinations of qualities are required to achieve different goals, such as reducing stress, improving physical health, or increasing concentration. To test this, he is enhancing the experience of the virtual reality headset by adding natural sounds, scents, and physical sensations.

Through his virtual reality research, as well as research on the impact exposure to nature has on health care expenditures and academic achievement, Dr. Browning is adding to the growing body of knowledge about the critical role natural spaces play in the quality of our lives. He hopes his findings not only motivate individuals to interact with nature on a regular basis but also encourage policymakers and budget managers to invest more in establishing and maintaining green spaces within their communities.